For the needs of mass production of an industrial device built by one of our clients, LABCSMART was asked to set up a means of manufacturing requiring the least possible human intervention, in order to automate the production chain. These products of two different types were based on i.MX6 and i.MX8 respectively. We therefore had to go around the means made available by both the community and by NXP in order to achieve the desired objective. Added to our expertise, it was possible to set up the mechanisms that we describe in this blog post.

The choice finally fell on NXP’s UUU (Universal Update Utility) tool as well as a series of patches developed internally at LABCSMART. In order to present the context, Yocto was the build system used, and naturally, the mainline versions of U-boot and the Linux kernel were, although these had very little (if any) impact on the implemented mechanism.

Integration of the manufacturing tool

We will first integrate via a Yocto recipe the tool that will allow us to communicate with the i.MX SoCs when the latter are in Serial Download mode. This is UUU (Universal Update Utility), formerly mfgtools. Below is the recipe for compiling the tool statically. The idea is to be able to make it executable on any Linux system without having to install any dependencies first:

In the recipe above, the line EXTRA_OECMAKE = "-DSTATIC=ON"is responsible for the static compilation of UUU.

Now that we have the NXP dialog tool, we can attack the main element allowing to communicate with the tool in question, the bootloader.

Although the sources for the SPL and u-boot are in the same place, the resulting binaries are separate. For the SPL, the binary has the same name. For u-boot, it is called u-boot proper. There are scenarios where these two binaries are concatenated to produce only one (this is our scenario). It should be noted that even in this case, the execution is done in two stages (SPL then u-boot proper) by connecting to their respective offsets.

The overall representation then looks like the diagram below 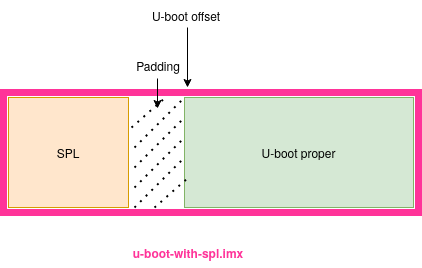 Now that we are familiar with the different components of the bootloader, we can move on to configuration.

The options enabled above will allow the SPL to support both USB in gadget and host mode, as well as support for SDP (Serial Download Protocol), which is the communication protocol used between the NXP SoCs and the UUU manufacturing tool.

The option CONFIG_SPL_USB_SDP_SUPPORT is quite particular. If enabled, the SPL code will detect if the board booted in recovery mode. The SPL code will then immediately enter in an infinite loop waiting for further downloads/commands over SDP from the host side, instead of branching (jumping) to u-boot proper’s start address.

Once these options have been activated, we will activate those relating to U-boot proper, which will allow us to support the different protocols necessary for manufacturing:

Below are some explanations:

Once the configuration is complete, we can move on to the next step. In the past, it was common to produce two bootloader variants: one for manufacturing, allowing the board to be booted in a particular mode allowing factory manufacturing. This bootloader then had to flash a second bootloader, which was the production bootloader intended for normal use of the board. We will free ourselves from this mode because we will use the same bootloader in both factory and production environments. The idea is to make the bootloader smart enough to detect if the SoC boots in serial download mode, and in this case, it enters a particular mode waiting for commands/instructions.

In this section, we will modify the bootloader execution flow so that when it detects the system is booting in recovery mode, it immediately runs the fastboot command, and enters in a loop, waiting for further commands. To do that, we will apply the following patch on our board related C file in board/<vendor>/[<board_name>/]<board_name.>c (the exact path depends on the board provider):

Patch to enter into fastboot when serial boot mode is detected

In the above patch, the is_boot_from_usb() function (executed from u-boot proper) detects if the chip is in serial download (recovery) mode when booting. This behavior is already implemented in U-boot sources for i.MX type SoCs. Similar functions must certainly exist for other types of SoC. The rest of the patch is pretty self-explanatory. In case of booting in serial download mode, we execute the fastboot command which allows to put the chip on hold for FASTBOOT commands. These commands will be sent from the host, via UUU.

In order to automate the tasks of loading, flashing and configuration, UUU gives the possibility of going through a script, which it will parse and process in a linear fashion, executing the commands one after the other. For our i.MX6 SoC, this has the form below:

Earlier in this post we talked about scenarios where the SPL and u-boot proper were concatenated to produce a single binary. This is the case here, hence the name u-boot-with-spl.imx. Via the script, the binary is therefore loaded into memory and executed. Then, following the reset, we inform UUU of the new identifiers through which it will have to access our device.

Obtaining the load address is quite simple. Either from U-boot’s Yocto temp directory as the following:

To obtain the u-boot offset from within the u-boob-with-spl.imx file, we will use hexdump to look for U-boot’s magic number. This magic number is defined in include/image.h in u-boot sources as the following:

with hexdump -C, it would result in 27 05 19 56. Let’s first look for this magic number in u-boot.img and extract the corresponding row that will be used as pattern in the concatenated U-boot binary:

The first one loads the concatenated binaries, and the second one jumps to the address where u-boot executable is expected.

On a physical storage device (eMMC or SD card for example), the i.MX6 boot rom expects the SPL to be at offset 0x400 (1KB). The offset 0x00011000 we have just found using hexdump is actually 68KB. This is the reason why, when flashing separated SPL and U-boot proper binaries using dd using bs=1K for example, for the SPL, we use seek=1, and for U-boot, we use seek=69, which is 69KB from the beginning of the storage device, but 68KB from the offset of the SPL.

Still in the script, we set the address of the fastboot buffer to 0x12c00000 (identical to ${loadaddr} used most of the time for i.MX6 type Socs). Although this address can be specified from the configuration file, it can easily be changed from the U-boot environment. Since we will use the same configuration for the i.MX8, we will modify this address during production.

Now that we have had some explanations of all of the lines in our UUU script, we can put everything in a Yocto class that will automatically generate it along with the size parameters that need to be set at build time.

Everything put together, we can imagine a Yocto class that is inherited by each image that need to be used in the manufacturing:

The previous class snippet, in the do_generate_uuu_configuration() function, we compute the bootloader binary size in hex, since U-boot’s mmc write command does only accept the size parameter in hexadecimal, and in term of number of sectors. After that, the function generate a suitable configuration. The do_manufacturing_bundle() function creates a manufacturing directory that contains the static-compiled version of UUU so it can be portable, as well as a bundle (a zip compressed archive actually) that will contain both uuu.auto, the bootloader binary (that is, u-boot-wit-spl.imx) and mmc.img. To start the flashing, you just have to boot your board in recovery mode and then sudo ./uuu <foo>_manufacturing_bundle.zip. UUU will automatically detect the file format and locate uuu.auto.

Now we are ready to boot our device and see what it prints in output:

In the previous snippet, we have an error. This error is from the SPL, and it means that the boot rom could load and execute the SPL, but the SPL was not able to find a suitable device from where it should load the bootloader. The SPL looks for that device in the function spl_boot_device(), which should return the list of devices from where the bootloader can be loaded. In the case of i.MX6, the function always returns BOOT_DEVICE_MMC1, which does not correspond to the eMMC interface but instead, SD-related. To fix the issue, the following patch has been added to the bootloader recipe (in Yocto):

SPL patch to boot from the eMMC

In the previous patch, we have changed the MMC interface that has to be returned when the device is requested to boot from the eMMC. After this patch has been applied and everything rebuilt,  we can reboot the device in recovery mode and restart the manufacturing using sudo uuu manufacturing_dundle.zip. Once done, we have the following output:

In the previous logs, we can see that the MMC interface from where the SPL tried to load U-boot proper changed from MMC1 to MMC2 and that it successfully loaded it. We also see U-boot normal boot logs, with the default default 3s counter.

All that being done, our manufacturing system is ready for production. We can commit everything and ship it for testing. After having implemented everything for the i.MX6, we can do the same for the i.MX8, as in the next section.

While the bootloader’s configuration can remain the same for both SoC, we will have some differences in UUU script, which would look as the following in case of i.MX8 (it also depends on which variant of i.MX8 you have; in this case, it is imx8qxp):

In the previous script, we have first changed the FASTBOOT buffer address so it corresponds to our i.MX8-related U-boot env’s load address, because in our default configuration it was 0x12C00000, which is an i.MX6-related configuration value. Thus, in the previous snipped, instead of the line FB: ucmd setenv fastboot_buffer ${loadaddr}, we could have just  defined CONFIG_FASTBOOT_BUF_ADDR=0x42800000 in our i.MX8 board configuration file.

Moreover, we did not need to flash the boot partitions because the bard has an SPI NOR flash that is use to store the bootloader, and the configuration switches on the board was set to always boot from this SPI NOR. For the rest of the code (i.e the implementation on the function do_manufacturing_bundle()), it has to be adapter to put whatever is need to boot/flash the device into ${MFG_DIR}/${BUNDLE_NAME} before the bundle is created with zip.

In this blog post we have learnt how to implement the software part of the factory flashing on an embedded Linux system with U-boot as the bootloader, designed with two NXP chips which are the i.MX6 and i.MX8. We have seen how to configure and how to tweak the bootloader. We Could have also used the UMS (USB Mass Storage gadget) for this, but it would have been necessary to manually switch between the eMMC hardware partitions. The mechanism described in this post can easily be adapted to other SoCs (from different vendors), provided that you have the host tools to make it automatic. And you what method do you use?  post in comments.

One Response so far.